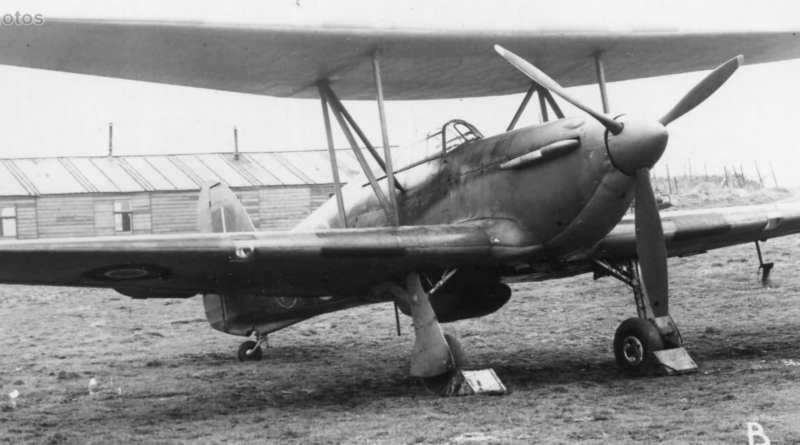 The Hillson FH.40 Hawker Hurricane biplane was an experimental aircraft designed to test the concept of the ‘slip-wing,’ which was discarded from the craft after take-off and climb. Lauded as one of the most exciting innovations of its time, surprisingly the development of the slip-wing was not overseen by any major manufacturer, but instead by a business which originally made the majority of its money outside of the aeronautical industry.

During the 1930s, Manchester woodworking firm F Hills and Son, trading under the name Hillson, decided to expand into the aeronautical market. By 1935 they had produced their first plane, the Mignet HM.14 Flying Flea named after Henry Mignet, a pioneer of light aircraft, but after undergoing trials at Barton Airfield in Manchester in October, the Mignet was scrapped after a wave of accidents prompted the aviation authorities to ban it entirely from the skies.

Undeterred by failure, Hillson’s next foray into the world of aviation was a lot more successful after they were granted permission to construct 28 Czech Praga E.114 Air Baby monoplanes in 1936 at their manufacturing plant at Barton. As well as keeping a few units for themselves to form their own fleet, Hillson also sold several Pragas to the Civil Air Guard.

Setting their sights ambitiously on the training and touring plane market, the company next built the Hillson Pennine, a monoplane of similar make to the Praga targeted at beginners and featuring a simplified control system, but this did not go further than the prototype stage as the company looked to re-focus their efforts on the Hillson Helvellyn, a mid-wing, two seated training air-vehicle pipped for use by the military and named after a local mountain.

Unlike its predecessor, the Helvellyn had a standard control layout as well as two cockpits fitted with Perspex panels in the lower fuselage, allowing both the instructor and the student to have expansive views of the runaway.

After being evaluated in 1939 the Helvellyn was selected for service following the outbreak of World War Two, marking Hillson’s remarkable transformation from modest woodworker to reliable aeronautical sub-contractor.

Hillson fully established themselves in the first few years of the war, making a good profit completing sub-contracts for nearby Avro, assembling wooden propellors, and maintaining a Civilian Repair Depot on behalf of the Air Ministry.

However, despite their newfound prosperity Hillson managing director W.R.Chown was still unhappy with the company’s position, making it his mission to dispel the image they were merely a jobbing sub-contractor, and envisioning for them a place on the very cutting edge of aerospace technology.

In the 1920s, engineer W.S. Gray proposed a novel mechanism called the ‘scrap-wing’, later known as the ‘slip-wing’, in which a detachable airfoil would be placed on a craft to enhance lift on take-off and climb before it was jettisoned. In theory, the reduction in weight would improve both agility and endurance, yet with the biplane in the ascendancy at the time, Gray’s ideas were never taken seriously.

However, the slip-wing was later unearthed by the designer J.H.Steiger, who assessed the merits of Gray’s half-forgotten innovation between 1938 and 1940 using a dusting Miles M.5 Sparrowhawk acquired from a storage facility in Woodley, Berkshire. Given the codename U-0223, the Sparrowhawk made its maiden flight in February 1940, and after a brief testing period, was submitted onto the civil register as G-AGDL in 1941.

Steiger’s experiments piqued the interest of Chown, who saw the advantages a slip-wing could bring to modern military aircraft, which although faster and nimbler than the previous generation of biplanes.

The heavier payloads of fighters required much longer runaways to take off, yet airfields were constantly being shortened and damaged because of the war, and so the ‘slip-wing’, with its impressive lift over shorter distances, was viewed by Chown as a possible solution.

In 1940 Hillson announced that they were to make a simple and easily maintained fighter that could be mass-produced and that could serve on a variety of battlefields.

Although Chown was backed by Hillson chief designer Norman Sykes, the Air Ministry were less enthusiastic, decreeing that a test bed rather than a working prototype should first be assembled. A working slip-wing would prove very lucrative for Hillson, for the Air Ministry promised that if it was effective it would be added to serving Hurricane fighters.

With the tantalizing prospect of a modification program on the horizon, the Hillson Bi-mono, painted with dark green, dark earth, and yellow in the standard camouflage palette of the time, was created in 1940.

Powered by a 149kW de Havilland Gipsy Six engine, a two-bladed fixed wooden propellor which was later replaced by a metal version, and replete with wooden wings and a welded tube with plywood covering that served as the fuselage, the unusual-looking craft was most noted for its resemblance to a shrunken version of the Hurricane.

The upper wing of the Bi-mono featured 5 attachments: one on the top of the canopy, two on each wing, and another two at 40% of the wing span placed at the end of ‘V’ struts, which would also be ejected with the wing mechanically.

During the assembly of the flyable Bi-mono, another model was also built and evaluated in wind tunnel tests at the Royal Aircraft Establishment at Farnborough where it performed promisingly, illustrating that the process of removing the slip-wing was trouble-free. In addition, after being assessed at a variety of speeds, it was discovered that the wing could be offloaded smoothly at any velocity.

Encouraged by their findings the Bi-mono, commanded by P.H Richmond and evaluated at Squires Gate in Blackpool by the Irish Sea, since the large size of the wings meant it was unsafe to eject them over land, finally took to the skies in early 1941 for wing ejection trials, which were observed by a group of assessors packed inside a Lockheed Hudson flying alongside it. I

t was here on July 16th 1941 that the Bi-mono successfully executed its first mid-air wing separation, with the only side-effect being a several hundred feet drop in altitude.

Yet despite good data, the Air Ministry later cancelled the slip-wing project and Hillson was forced to look elsewhere.

With the Bi-mono showing there was potential in the slip-wing, Hillson next partnered up with the Airplane & Armament Experimental Establishment (A&AEE) based in Boscombe Down in Wiltshire, who were primarily interested in how the modification could serve RAF operations.

The chosen test craft was not the Bi-mono, but a Canadian Hurricane with serial number 321, fitted with a slip-wing by Hillson at their Barton factory after being licensed to them on April 13th 1942. The adapted plane was designated as the FH.40 by Hillson and included a second wing weighing 314 kilograms, equipped with release gear and struts made to the exact specifications of a Hurricane wing, but without the ailerons and internal fittings that connected it to the fuselage.

The wing, which could be released electronically, was supported by N-shaped inter-plane struts placed just above the undercarriage bracing points, being further held in place and made laterally stable by struts that went from the rear top inter-plane strut to just below the cockpit. In general, the FH.40 was exactly the same as a Hurricane, apart from an extra wing and a 10% increase in the area of ailerons, implemented so that the pilot could have better control over the new biplane configuration.

Like the Bi-mono, testing was carried out by the sea, at Sealand near Chester under the direction of A&AEE, who were able to initially achieve some positive results. However, after an accident in February 1944, the FH.40 was sent for repairs and earmarked for collection in May of the next year before it faded away into obscurity, for no records exist after this date.

Why Did the Slip-Wing Fail?

The FH.40 was shelved in part because of the emergence of more powerful engines and the establishment of British air superiority after the Battle of Britain, which resulted in an airfield construction boom, which meant that its original purpose to take off on short and damaged runways was now obsolete.

Furthermore, the slip-wing proved too expensive to be treated as a disposable item, and a parachute system designed to salvage and reuse the wing was deemed overly complex and unnecessary.

The FH.40 also marked the end of F. Hills and Son’s brief stint on the frontline of aircraft research as well as W.R.Chown’s dream of making his company the next aeronautical titan. For the rest of the war, the business reverted to its more familiar role as a dependable sub-contractor, earning most of its money putting together Percival Proctor communication aircraft. 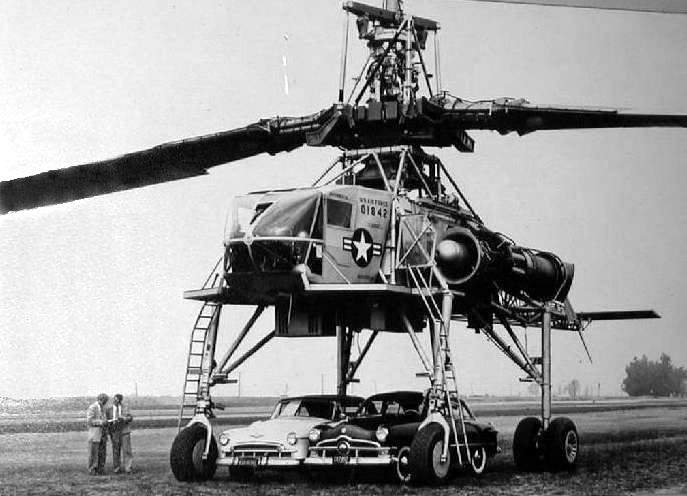 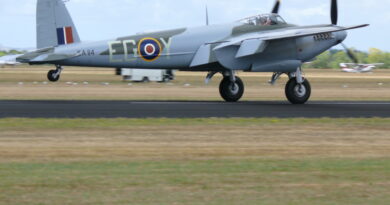 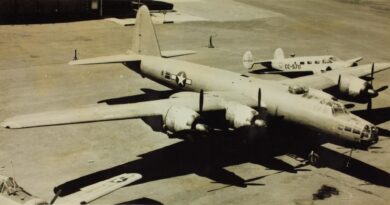