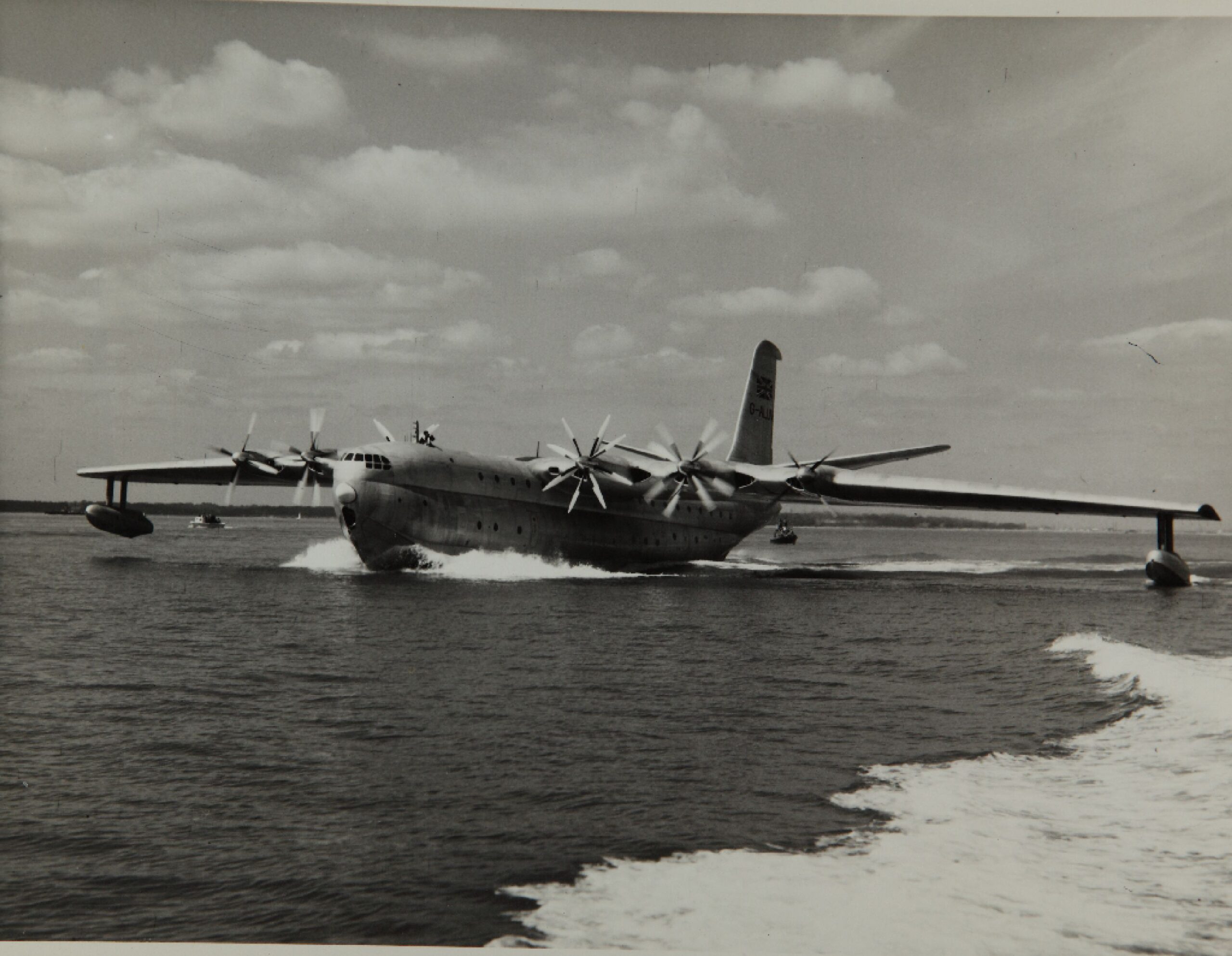 A product of the optimism of post-World War Two Britain, the Saunders-Roe Princess, the largest metal flying boat ever created, promised to revolutionize commercial air travel between London and New York.

First envisioned by the Saunders-Roe aeronautical company, it aimed to build on the success of the long-range flying boat services that had transformed international air travel from the late 1930s and to compete with ocean-liners as the preferred mode of transport for crossing the Atlantic Sea.

However, by the beginning of the 1960s, the flying boat model had all but disappeared from mainstream aeronautical thought, with the upper and lower deck of the last surviving Princess being ignominious re-purposed as an office and a workshop by 1967.

This article will chart its impressive fall from grace.

Towards the end of the Second World War, the potential of the flying boat still excited many, most notably Arthur Gouge, who became vice-chairman of Saunders-Roe in September 1943 and the model’s greatest advocate.

Gouge reinforced the new direction of the company that same year, publishing a document tasked with persuading doubters entitled ‘The Case for the Flying Boat’.

Gouge himself was the leading expert of his day, having been design-lead on the Shorts Empire C Class, G Class, and Sunderland flying boats of the previous generation during his time as an employee at Shorts Brothers.

Looking to dent the revenue streams of ocean-liners, supporters envisioned a craft that could carry up to 105 passengers on non-stop flights between London and New York. As a result, the Saunders-Roe Princess was going to be enormous.

This limiting factor however was being minimized by contemporary advances in turboprop powerplants, which could improve power-weight ratios to lift even the heftiest craft into the heavens.

Despite the furor, some were not so enthusiastic about extending the lifespan of the flying boat after World War Two. Most damning was the report penned by the Brabazon Committee, which did not recommend its inclusion in future British fleets.

Nevertheless, and ignoring Brabazon’s recommendations, the Saunders-Roe teamed up with the Ministry of Supply (MoS) and the British Overseas Aircraft Corporation (BOAC), who were looking for a flagship commercial airliner, to prove that the flying boat could still be cutting-edge.

Comforted by modern advances in turboprop engine technology, weight was not viewed as a significant factor in the initial designs. In 1944, the first model had a weight of 187,000lb, increasing to 250,000lb with the proposed addition of 8 Centaurus Piston engines.

3 different prototypes for the Princess were approved by the MoS in May 1946, costing a total of £2.6 million. Saunders-Roe was to be helped by a wide array of sub-contractors such as the Bristol Airplane Company, De Havilland Propellors, and Boulton Paul Aircraft.

In fact, because of the strength of the UK aeronautical companies at the time, the Princess was built almost entirely with British engineering prowess.

At first, developers mulled over which type of turboprop engine would be most suitable, eventually settling on the Proteus 2 turboprop, the latest innovation from Bristol.

Because Bristol’s engine was a reverse-flow, the wings and propellors of the Princess had to be re-designed almost entirely in 1947. Straying further from the original schematics, a larger fin, and higher-mounted tailplane was added the next year and the nose was modified to give the pilot a better view from the cockpit.

The name of the craft, the Princess, was decided upon in November 1948 and it was designated SR.45. The maiden voyage was in late 1949. However, the Bristol engines added a layer of complexity that forced Saunders-Roe to delay, and in February 1949 they announced the first prototype would be finished at the end of the year.

As a result of delivery delays, they were forced to extend their deadline for flight trials even later, this time aiming for a date some time in 1952. As the setbacks mounted, the budget for the Princess program skyrocketed to £10.8 million by March 1951.

In addition, because the Bristol engines were in their developmental phase, they increased in price from £407,000 in 1946 to a staggering £4.9 million by 1951. This was also because the promised Proteus 2 engines proved underwhelming with a measly power output of 2,500 shaft horsepower.

The unavailability of a strong engine would hamper the progress of the Princess greatly, with the far superior Proteus 3 released too late to be included in the final prototypes.

It would take until October 1951 for the first Princesses to be fabricated. They were initially built without the engine, wings, and tail at Saunders-Roe’s hangar at East Cowes, before being moved outside to another location as the plane was simply too big.

The Saunders-Roe Princess was manned by a crew of 6 comprising of 2 pilots, 2 engineers, a navigator, and a radio officer.

The Princess had a cruising speed of around 370 miles per hour and flew at an average altitude of 32,000 feet. Its weight was considerably increased by the four fuel tanks located in the inner wing structure, which could contain 117,450Ib of kerosene petroleum.

Its wings were 219 feet and 6 inches in span and 148 feet in length and were de-iced thermally using hot piped air sent from the exhaust. The tailplane had a separate system, removing ice with kerosene-powered heaters which burnt on their own fuel supply.

The giant was propelled by 10 Bristol Proteus 2 engines. Located on each side, 2 units made of 4 engines used contra-rotating propellors to launch the Princess through the sky, with the remaining two engines employed for taxying and water maneuvers.

The Princess was constructed with passenger comfort as a top priority. The hull was pressurized, providing the conditions usually seen at 8,000 feet for flights up to 40,000 feet. In addition, large capacity compressors, filters, heaters, humidifiers, and automatic controls were installed for passenger relaxation.

The upper rear cabin was designated for 33 first-class passengers, and on the starboard side were 13 first-class cabins that could be customized for day or night use with 13 retractable bunks. Accompanying the cheaper tourist class seats were dressing rooms and bars, with a larger bar and a dining room reserved for the first-class.

Even before its maiden flight, the fate of the Princess was already being sealed. During the 1950s, the landplane was emerging as a cheaper alternative to the flying ship.

The Comet, conceived by one of Saunders-Roe’s sub-contractors De Havilland, was taking the commercial aircraft industry by storm, as was the Boeing Stratocruiser which offered the same level of service offered by the Princess but at a considerably reduced cost.

The popularity of landplanes was compounded by the lack of commercial interest in the Princess. In October 1950, BOAC had made tentative moves, creating a Princess Unit headed by Captain HWC Alger whose aim was to investigate the resources needed for the Princess to operate commercially.

But only a month later BOAC discontinued all of its services that required flying boats, nearly a year before the Princess was even made.

The declining enthusiasm of a company that had closely overseen the development of the Princess since its conception and was expected to purchase the first shipment proved disastrous for Sanders-Roe, who struggled to find another buyer.

BOAC briefly reconsidered the Princess in August 1952, with chairman Sir Miles Thomas expressing renewed curiosity, but by the next month, he had changed his opinion again, arguing that the flying boat was an outdated idea.

They were particularly concerned with the poor performance of the Proteus 2 engines, preferring to wait until the Proteus 3 was released before making any more major decisions.

Despite difficulties, the 3 prototypes were completed and designated as G-ALUN, G-ALUO, and G-ALUP. Saunders-Roe Chief Pilot Geoffrey Tyson flew the G-ALUN for her first test flight in August 1952, which lasted 35 minutes and saw her reach a top speed of 280 mph.

Tyson’s flight was dogged by faulty temperature gauges which gave him incorrect readings throughout.

Problems again began to surface in September when it was exhibited at the Farnborough Air Show, with Tyson finding it extremely hard to keep the plane level and narrowly avoiding disaster with a steep bank past the onlooking crowd.

However, it was also praised for its stability during take-off and landing thanks to the effective hydrodynamic design of its bottom hull. Nevertheless, The Princess wouldn’t get much flight time, spending just 96 hours and 50 minutes in the air for a total of 47 flights.

The Hunt for a Buyer

Even after it had made its debut, fortunes continued to look unfavorable, especially with the release of the Boeing Model 707 jetliner just under 2 years later which could cross the Atlantic in 7 hours with 137 passengers onboard in comparison to the Princess’s less than impressive 11 hours.

Work was canceled on the G-ALUO and G-LUP, both of which were transported to Calshot Spit and put on indefinite hold.

The G-ALUN fell more elegantly, making another appearance at Farnborough Air Show embellished with blue, yellow, and white before it was shelved. The Princess program was drained of momentum partly because the new Minister of Supplies, Duncan Sandys, was unconvinced by it.

He even rejected a £3 million offer for all three models by Aquila Airways, which contributed to the program’s termination by summer 1954.

Saunders-Roe however did not give up on their project, continuing to improve it and explore more potential functionalities. In 1956 it was given a military application as an Airborne Early Warning air vehicle, being fitted with three AN/APS.20E radars inside its nose.

In 1957, in a bleak appraisal of the future of the flying boat, it was modified into a landplane, with the hope it could be used as a troop transport. None of their rebrands were successful in winning client contracts.

On the other hand, the next year looked more promising, with the Princess coming to the attention of the US Navy, who hoped to use it to test out nuclear reactor propulsion. When discussions broke down the US army made another overture, including the Princess in planned commercial undertakings.

It was to prove another frustrating failure, with Air Vice Marshall Donald Bennett and his civilian business partner Brian Halpin hastily withdrawing their offer in March 1960 after waiting over a year for the government make a decision.

Halpin’s ambitions were once again dashed by the British government in November 1960 after he founded an airline company called British Princess Flying Boats Ltd. Halpin’s dream of a commercial air route linking Southhampton with Baltimore, Chicago, and Detroit starting in 1962 received scant attention from British policymakers, leaving him no option but to retract his offer for a second time.

When Saunders-Roe was disappointed again with the collapse of the sale of the G-ALUN to the Winder Corporation of Florida in May 1962, it seemed that all hopes of breaking even had faded.

Expectations were revived in 1962 when the three Princesses were bought by Mekie on behalf of American aeronautical behemoths Aero Spaceline, who wanted them to transport parts for the NASA launch vehicle Saturn V.

In January 1964 all three were purchased for a paltry £30,000, with the inspections taking place shortly after revealing they had even less value.

Mekie mechanics found that the G-ALUO and G-LUP, which had been laying idle for nearly 10 years, were suffering serious corrosion damage, and they were subsequently sold for scrap metal.

It was also discovered that the G-ALUN, the only Princess to ever fly, was also in bad condition, and it was eventually disassembled in 1967.

In the end, the Princess died ingloriously like the other 1950s programs instituted by Saunders-Roe. Project P.131, with its blueprint for a 74-seater 130,000lb craft, and project P.192, sitting on the other end of the scale, with its extraordinarily unrealistic 1,500,000lb commercial airliner with 1,000 seats were also abandoned, as was the flying-boat model itself with the advent of superior landplanes.

Another Article From Us: Blackburn/Hawker Siddeley Buccaneer – Carrier-Based Attacker 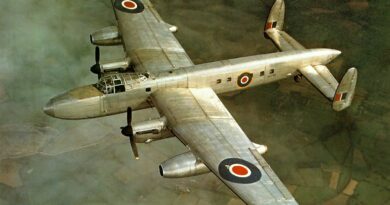 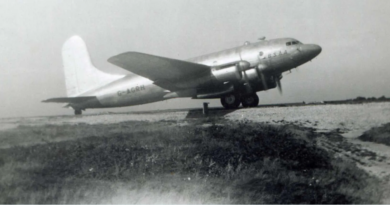 The Star Ariel – Another BSAA Disappearance